Today I'm feeling weary; blog weary.  It has reached the point where I don't seem to be able to come up with any subjects of interest to anyone.  Oh, there are the faithful few who comment each time I post something and I'm thankful for them, but it really isn't worth my effort or the time it takes to prepare a post now.   I know a lot of people have gone to Facebook, which I don't do, nor do I text, so perhaps that has taken its toll on blogging.

When I first started writing for the blog, it was to be about my quilting, but I never found many women who wanted to share words with me about this.  I made a few dolls, doll clothing, and stories from my childhood to write about.  I'm a FarmHer, and only one other person connected with me on work I do in the chicken houses and on the farm.

So, for now I'm going to be absent from my blog.   I'll continue visiting your blogs.


Thank you, and may God bless each of you.
Charlotte 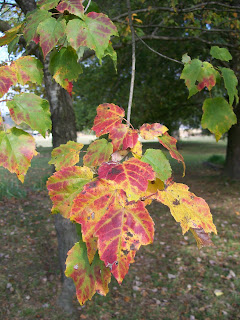 A New Chapter in My Life

Yesterday I started a new chapter in my life.  I became great grandmother to a 7lb 4oz  baby girl, Emalyn Claire.  I haven't seen her yet, only a picture right after her birth.  Of course she's beautiful!  I'm Mama Charlotte to the grand kids, so now I suppose this makes me Great Mama Charlotte. ;)
Posted by lil red hen at 3:50 PM 19 comments:

Everyone complained about how cool April was and then how fast the hot weather came in May.  Well, here we are in June, expected to be hot and humid, and everything is dry.  Perfect weather for cutting and baling hay.

We started the hay season yesterday and continued today.  I wondered, at age 70, if I could make it through that season, and here I am at 77, still in control of my senses and physically able to drive the tractor and rake the hay for the farmer.

You never know exactly what to expect when doing farm work.  Take today for instance: I was raking the last of the hay when I noticed something on the right front tire.  Assuming it to be a stick I decided it needed to be removed, so I put the tractor in neutral, set the park brake and got out to see what it was.  Surprise of all surprises!  This is what it was! 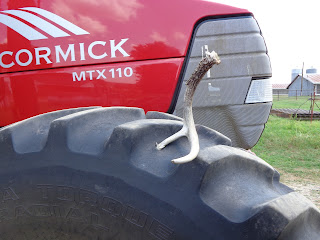 A deer shed!  Deer antlers grow in the spring, mature in the summer, then are shed in the winter.  They are rarely found in nature because they are eaten by rodents since they are rich in calcium and other nutrients.  Anyway, a rodent didn't find this one, I did!  I had sense enough not to pull it out of the tire and when the farmer caught up with me, he took a small saw from his tool box and cut it off, leaving a "plug" in the tire. 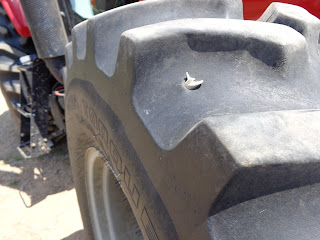 I watched the tire carefully all the way home to make sure it wasn't going flat.  The farmer took it off and has taken it to town to have the tire repaired.


Another incident to record in our journal of farm happenings.

This apron was quite a challenge.  It was big and full to work with; I had to make bias edging, baste, rip out, baste again; on and on.  I think it is a pinafore apron.  The pictures are not good; I don't have anyone to model it for me, nor do I have a dress form to display it on, just the good old bed. ;)  First is a close-up of the fabric and the bottom front: 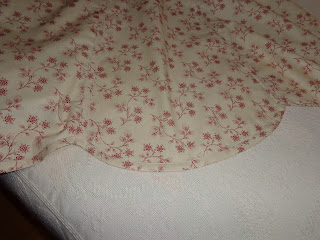 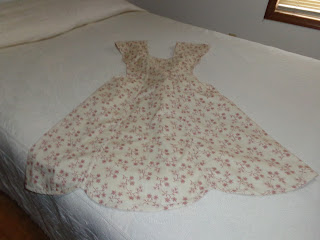 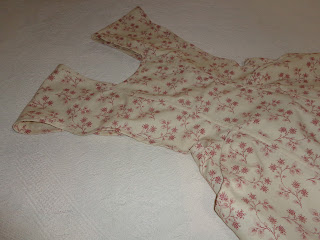 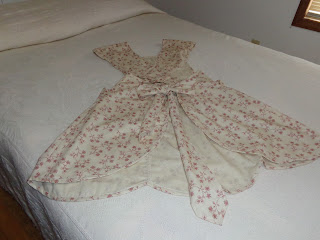 The Pattern, which I don't plan to use again ~ soon, that is: 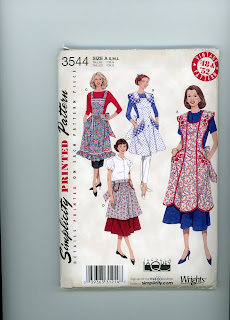 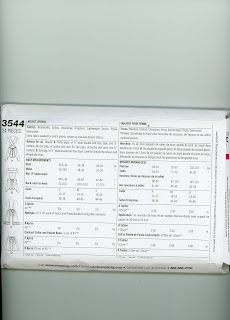 There is a copyright number for the year 2007, but it might still be available.  I've had it for several years.  The contrasting color bias would have been nice on my apron but I couldn't fine anything that matched well enough to use.

At the end of last summer,  an eighty something row crop farmer told my farmer, "Well, I made it through another year!"  We felt a little the same way, having completed the hay season.   The last day we baled I was so tired that night I couldn't go to sleep for a while.  The rains were just right last summer for the meadows to produce grass for more than one cutting.  The farmer says we put up 1400 round bales of hay; that's a lot of grass and more than enough to feed the cattle for a year, but it's always good to have extra in case next summer is dry. 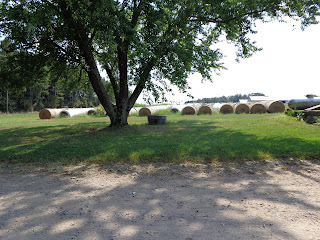 Of course row crop farmers can call an end to their harvesting "another year", but with chicken farmers it's "what goes around, comes around" with no noticeable beginning or ending to a new year.  We have just finished the first flock of chickens for this year, having had to keep them for eight weeks, longer than any we have ever raised.  The company wants a larger bird; I suppose consumers demand larger portions to eat.  When we first started raising chickens they rarely weighed as much as four or five pounds in six weeks times; however the word obesity was rarely heard of either.


Because of my cataract surgery last spring, we didn't have much of a garden, but by late summer we planted peas and I froze enough for the winter.  A lot of our fall and winter weekends would find us getting in firewood for the furnace.  The farmer took the tractor and dump trailer to the edges of the fields and brought in logs which he sawed into usable lengths, then split them with an attachment on the front of the BobCat.  I loaded the pieces onto the bed of the side by side and brought them to the house to stack. 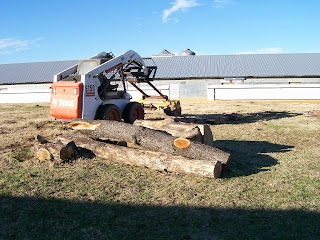 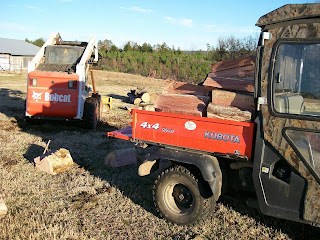 In December, the farmer was sick; he thought he had the flu but it wasn't anything like I remember the flu being.  He continued feeding the hay and helping in the chicken houses then spending the rest of the day in his recliner.   Much of the Christmas joy was lost because we both felt bad for a while.  On the 21st of December we had been married for 57 years.


The Christmas card from our older grandson and his wife announced that we would be great grandparents in July, and since their "reveal" party we know the baby will be a girl; our first.

The month of January was mostly very dry but we did get about two inches of snow and around 10 inches of rain fell in February.  Although everyone thought we had a really cold winter, I didn't think it was too bad.


I stayed busy in the sewing room too;  two aprons, 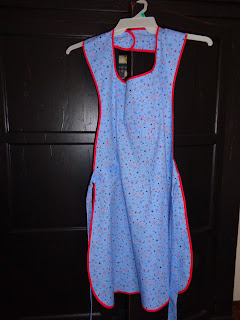 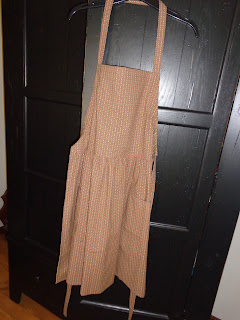 two quilt tops, one large top and one baby top 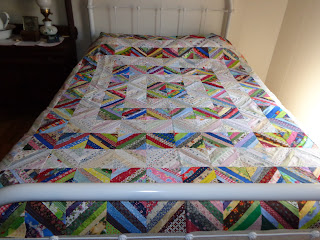 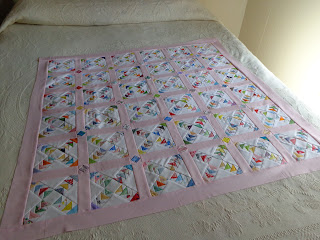 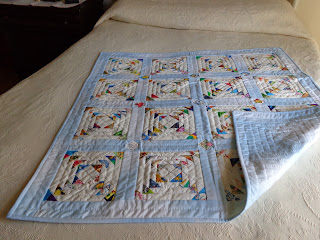 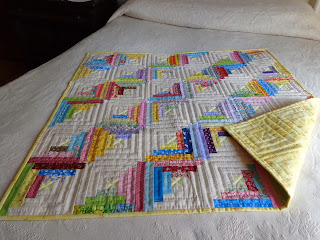 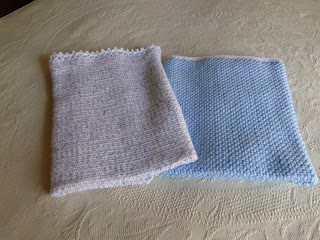 The quilts and tops were all made using scraps; however, not to worry, I didn't use near all of them.

And now spring is upon us; robins are scratching through the old leaves, buttercups are waving in the March winds, and the cattle are searching for every little sprig of green they can find.  We'll start a new flock of chickens in two weeks and then only a short span of time until it'll be back to the hay meadows to start "through another year".

In Spite of Neglect, 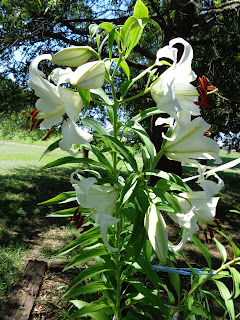 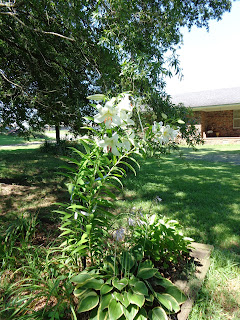 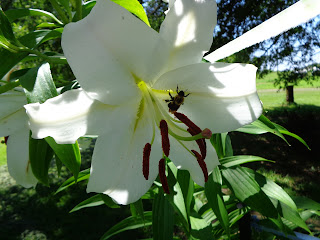 I've had some beautiful flowers, among grasses, weeds, and tree saplings.  This is a white Stargazer Lily which has grown taller than me.  Each "stem" has from three to five big buds, making it very heavy and prone to be blown over by the wind when it rains.  So ~ I've tied it to a tree branch; a person does what a person has to do.


To answer a question from Chip Butter on my last post (she asked how I learned to crochet):  forty years ago a teacher at the local high school, held a class for those interested in learning to crochet.  I attended and learned to make a ripple afghan.  It was something learned that I have used over and over and enjoy so much.  Many times I have wished I could thank her for giving her time and knowledge to teach this class, and wonder how many of those attending the class carried the passion for crochet like I have.


Have a blessed weekend,
Charlotte

The Use of More Scraps...

This time it's yarn scraps.  In the quest to find something to keep me occupied these past weeks, I decided to try to use up some of my baby yarn left from projects I'd done before.  I found this pattern,
https://www.favecrafts.com/Crochet-Baby-Blankets/Hushabye-Simple-Shell-Afghan, online, and had the colors I needed.  This is my finished blanket.  Both blue rows and pink rows are the same color; the far rows look darker but they aren't. 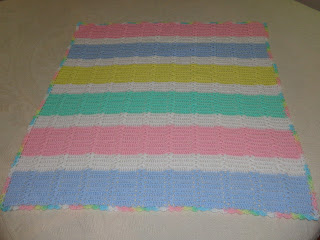 Because I used baby yarn, in order to achieve the right width of the different colors, I had to make eight rows of the colors and four rows of the white.  The pattern shows more rows of color but there wasn't enough green in my stash to make more; anyway, it would have been too long.  I've hunted for baby yarn online and at Wal Mart and can't find it.  The brand is Red Heart; do they not make this yarn anymore?  It's really delicate and soft.

I'm always shy when showing what I've made; I feel like a cat who has brought a mouse to the back door for praise. :)


Have a safe and happy fourth with your friends and families.
Charlotte


Please join me in our corner of the world where we farm; we have been contract poultry growers since 1972 and also have beef cattle. I work daily on the farm at age 79, and quilt or sew when there's time. I also love to dabble with dolls and doll clothing, and remembering things from my childhood. 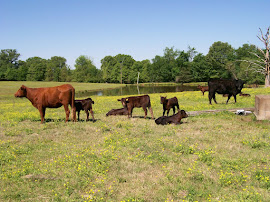 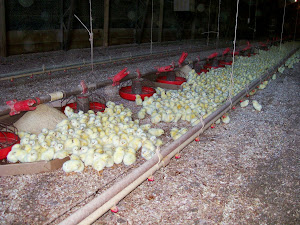 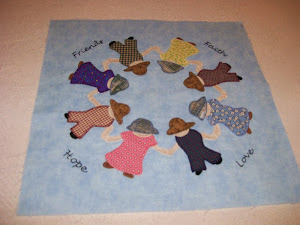